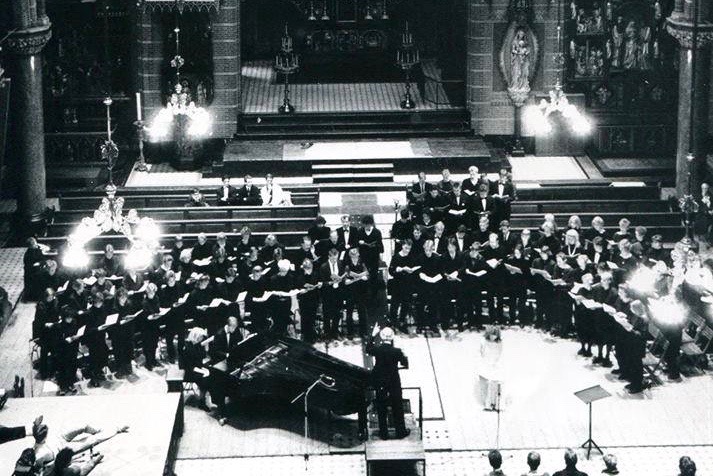 The Vu-choir through the years

The VU-choir has a rich history. Every conductor and board left their mark on the repertoire and the choice for each piece was also affected by the spirit of the time.

The fifties and sixties
In the early years, the VU-choir often worked together with the Bach Orchestra. The two ensembles had the same conductor, Simon Jansen, so a collaboration was a logical step. In this era, the VU-choir was sometimes also accompanied by the famous organists Ton Koopman and Bernard Winsemius.
The choir often sang Sunday church services. During rehearsal weekends, it was arranged that the choir could sing on Sunday in a nearby church. This was much appreciated by the members, as it offered them some experience to perform in front of an audience. The concerts mostly took place in churches, but for the performance of the Carmina Burana (May 1967) the board booked the Concertgebouw. Usually there was more than one performance of the same program in different locations. The choir also sang at the VU-days, which were held around the anniversary of the VU-university.
The instrumental accompaniment varied a lot. The choir worked with orchestras or with an ensemble of students from conservatories. For the harder vocal soloist parts, professionals were hired, whereas the easier ones where sang by members of the choir.

The seventies and eighties
The clothing of the choir members during concerts was quite flexible in the second half of the seventies. Everybody wore whatever he or she liked. For the finishing concert of the century party of the VU in 1980, the board had a hard time convincing everybody to wear black. In the following concerts, the black clothing gradually made a reappearance in all concerts. When the choir hired a new conductor, Huub Kerstens, the accent shifted completely to the concerts. Under his direction, the choir especially flourished at the Holland Festival in the eighties. Concerts with modern music were alternated with concerts with older music.
Huub choose to work together with orchestras. Mostly, the choir sang with professional orchestras, but there were also collaborations with the VU-orchestra. The soloists were also professional, and often members of the Dutch Chamber Choir. In 1979, the Residentie Orkest invited the choir to join their performance of the Symphony of Psalms by Igor Stravinsky. There was also an invitation from the Utrechts Symfonie Orkest. During these performances, the Nederlands Danstheater was also involved. Apart from working together with the other choirs that were conducted by Huub Kerstens, the choir also sang with the Hoofdstadkoor.

The nineties
1995 was a year full of activities in and outside of the Netherlands. During spring, the choir sang the piece “Of Man” by Willem Woestenburg in Amsterdam and Düsseldorf. In October the choir performed at the 115th anniversary of the VU. This concert was held in the Concertgebouw and also starred the other choirs and orchestras of the VU. A few days later, our own concert, in which we performed “The Nun’s Priest’s Tale” by Gordon Jacob, took place at the same location. This project was a collaboration between the VU-choir, the VU-orchestra and the Tilburg student choir Contrast and was a retake of a concert in 1992, which was visited by the widow of Gordon Jacob.
The highlight for most choir members was the concert trip to the Czech Republic. At the invitation of the VU-orchestra, we participated in the Festival of Student Orchestras in Prague and gave a concert in Brno.

During the directorship of Jean-Marie ten Velden (1984-2012) there were hardly any collaborations with professional orchestras or soloists. This was replaced by vocal and instrumental accompaniment by students from the conservatory.
Just like in the fifties and sixties, the choir worked with other student orchestras, like the UvA Orchestra J. Pzn. Sweelinck and the VU-Orchestra and student choir outside Amsterdam, like Krashna Musika and Contrast.
The Carmina Burana and parts of the Cattulli by Orff were performed for the New Year’s celebration of the VU-Vereniging in the Concertgebouw in January of 2001. The choir performed the same pieces in the Beurs van Berlage in Amsterdam and the Haarlem Philharmonie.
With the conductor Annemiek van der Ven, who got appointed in 2012, the choir changed their musical pathway again. There is a mixed repertoire of old and modern music, that is appealing to the public. Most pieces stem from the 19th century and the collaboration with other choirs continues. 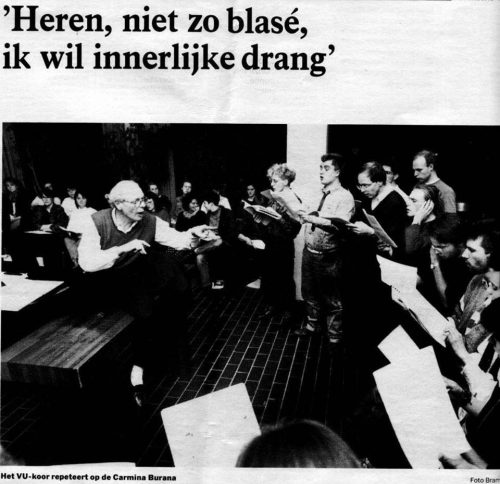 The VU-choir worked with six different conductors since its foundation in 1950. In 2012, the first female conductor was appointed.

Henk J. Smit
Before the VU-choir was founded, there were quite some issues that had been tackled. The foundation took 10 years. The first performances of the later VU-choir were at the anniversary party of the VU-corps. These performances were such a success that a real choir was founded that had the name of “Studentenkoor aan de Vrije Universiteit”. The conductor became Henk J. Smit. The first choir of the Vrije Universiteit only existed till 1952.

In the years after, there were many attempts to revive the choir. This succeeded in 1955 with the foundation of a male choir for the festivities for the 75 year anniversary of the VU. That choir became a great success and the singers wanted to continue singing, with their new conductor Simon C. Jansen. They got permission from the board of the VU and the responsible students association on the condition that they made it into a mixed choir with male and female singers.

Simon C. Jansen (1911-1980)
The VU-choir was conducted by this conductor between 1955 and 1960. Besides conductor of the VU-choir, he was also the organist of the Westerkerk in Amsterdam, where he founded the Westerkerkkoor. Simon C. Jansen was 44 years old when he became the director of the VU-choir. Before his appointment, he studied organ and piano at the Amsterdam conservatory, where he got his soloist degree in 1936. In 1937 he moved to Arnhem with his wife, because he got the job of organist in the there located Eusebiuskerk. The bombing and fights around the battle of Arnhem destroyed the Eusebiuskerk and its organ. After these affairs, he soon returned to Amsterdam.

Reinhardt van Randwijk
Van Randwijk succeeded SImon C. Jansen in 1960. He was stricter than his predecessor. The rehearsals started strictly on time and members had to cancel in case of absence. Besides, there was no break during the rehearsal. He had the following argument for this decision: “if members get the opportunity, they flee in the break.”

The singing career of Van Randwijk was interrupted by WWII, because he did not want to join the Cultuurkamer. After the war, he moved to Amsterdam, where he ended in the Dutch chamber choir. In 1958, he started a new career as music teacher on the Christelijk Lyceum Buitenveldert. The school choir and orchestra he founded had a good level
With the appointment of Van Randwijk, the choir started growing. By actively recruiting, the member count grew in two steps. First in 1962 and a second time in the beginning of the academic year 1965/1966.

Van Randwijk usually choose religious works for the choir, apart from a solemn exception. The choir accepted these choices. Apart from that, the religious works fitted the identity of the Vrije Universiteit well. Van Randwijk worked together with a programme committee that eagerly suggested some hard works, mostly classical, but some modern works too.

The spirit of the sixties stroke the VU-choir with a delay. In the beginning of the seventies, the organisation got more messy, resulting in Van Randwijk losing his grip on the policy of the choir. He left the VU and its choirs. After that, the changes in musical policy and appearance of the choir could be implemented without problems with his successors.

When Van Randwijk left, a lot of the old members left. However, new members joined and the choir continued.

Jean Marie ten Velden (1946- )
Jean-Marie ten Velden was interim conductor between 1975 and 1977. He started by programming modern choral music (The Symphony of Psalms by Stravinsky). The choir did not yet appreciate the repertoire and the conductor had to return to the classical repertoire.

Sam became conductor of the choir for a second time in 1984. In 1977, he left the choir to conduct an orchestra he got an offer from and to do other activities. When there was no substitute for Huub Kerstens in September 1984, Sam ten Velden was asked to be the conductor again. He participated in the application procedure and was hired for a second time.

Van der Velden kept up with the existing musical policy of Kerstens. The programme carried works from the twentieth century, varying from music from the beginning of the century till recently published works. The choir regularly approached composers to write a composition for them. Of Man and Echo, a poem by Maaike Kroesbergens were two composition by Willem Woestenberg. A new generation of composers got a chance to have their works performed. The conductor also offered opportunities to young executing musicians to perform modern repertoire and gain stage experience. Besides, Sam had fun in working together with other student choirs and orchestras. The level of the repertoire had steadily got higher during the direction of Huub Kerstens, but Ten Velden throttled back in that respect.

In February of 1987, the VU-choir performed on the pop stage Paradiso in Amsterdam for the Dutch premier of the video “Hieroglyph”. This was a graduation project by students of the Rietveld Academy in Amsterdam. The choir sang Die Burgschaft by Kurt Weill.

Jean-Marie was in favor of doing various concerts of the same programme. This was in line with the wish of the university who wanted the choir to perform outside Amsterdam. Besides their own concerts, the VU-choir joined projects of other choirs. Also if the choir was invited for special projects, Jean-Marie ten Velden collaborated. In 1989, for example, the choir sang in a promotion movie for Amnesty International.

Along with the VU-choir, Sam ten Velden also conducted Pro Musica in Bussum, the choir of the Sweelinck conservatory and the choir of the Hogeschool voor de Kunsten. He was also a professor in choir and emsemble conducting at the Sweelinck conservatory. Sam ten Velden announced his departure in 2012 after more than 25 years of conducting the VU-choir.

Huub Kerstens (1948-1999)
Huub Kerstens had been conductor of the Amsterdams Universiteitskoor for three years, when he was asked to be the conductor of the VU-choir in 1977. During his leadership, the accent shifted completely to the concerts. There was always a party after a concert and Huub used to give a speech before each concert.

The choir started singing modern repertoire, which formed an adventure and challenge for the members. Huub Kerstens held a preference for this type of music, as it was more spirited. Besides that, he said: What the VU-choir does is unique in the Netherlands. There are no other choirs doing the same”.

Many of his ideas were realised by the VU-choir. This included the choice of the musical programmes, the new composition that were made for the choir (which were made by composers who normally would not have written music for a choir). These steps have been important for the history of the choir.

In 1984, Huub stopped conducting the 4 Amsterdam student choirs he used to conduct. He made this step, because he wanted to devote more time to his other passion: composing.
Later in his life, he returned to choir conducting. Ultimately he founded his own choir in 1986, The “Koor Nieuwe Muziek” and became conductor of the “Ensemble Nieuwe Muziek

Next to the VU-choir, she also conducted “The Gents” a male ensamble. Just before her 10 year anniversary as conductor of the VU-choir. She decided to go back to school to obtain a primary school teaching degree. Because of conflicting schedules, she had to leave the choir.